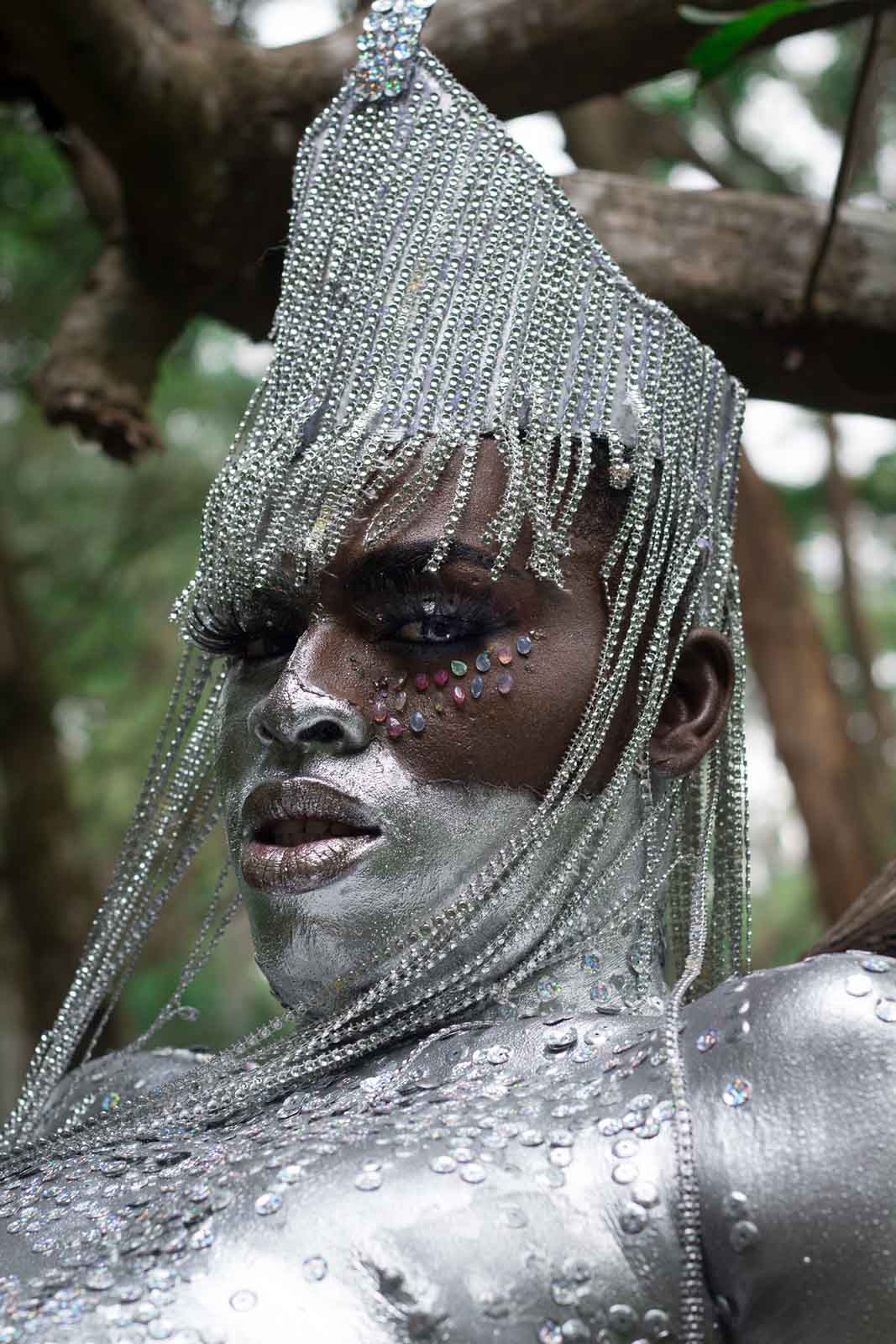 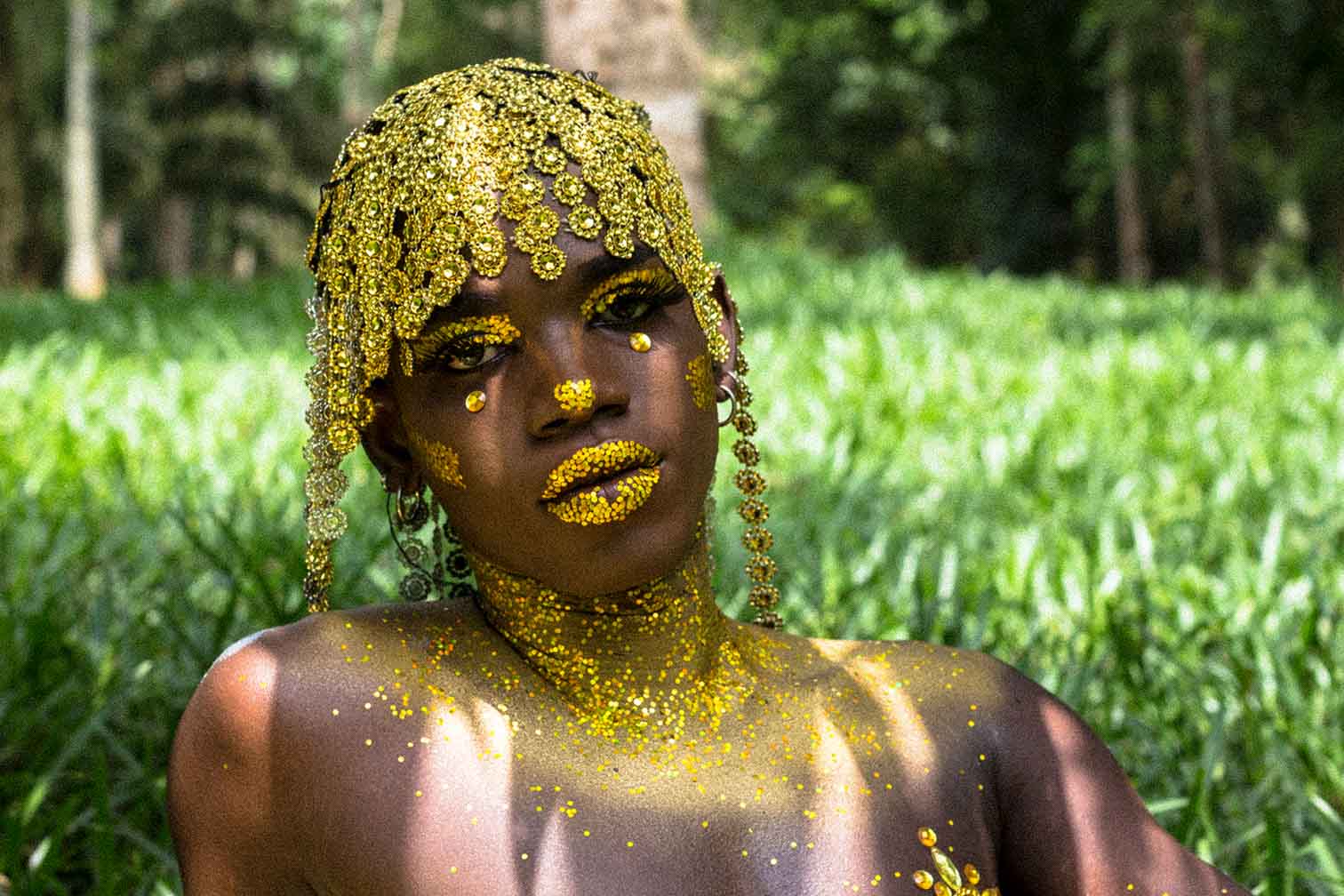 The Queens of Babi

I shot Kesse Ane Assande Elvis Presley, or simply coined as “Britney Spears” by her friends, along with Mohamed, aka “Baba” for a new personal series of mine entitled “The Queens of Babi”. The series was created after meeting and talking with the members of Abidjan’s drag community, and discussing how to highlight their talent and creative passions.

Ngadi Smart is a Sierra Leonean Photographer based in London, whose focus is on documenting Cultures, Subcultures and Intimacy. Her photographic work has long been focused on how people self-identify and choose to present themselves in front of the lens. As of late, her interest has been documenting Black sensuality and culture through an African lens and point of view. She aims to show as many representations of African people, and what it means to be African, as she can.

You are originally from Sierra Leone, but now living and working in between London and Abidjan. How does this transcultural and transnational lifestyle affect you as an artist?

In terms of how living in both places have affected my work, I would say it has definitely made me more open to different cultures, lifestyles, and most importantly, people: I think you can see the interest I have for others in my photography, particularly in the topics I choose for my documentary photography, which is mainly portraiture. I have an avid interest in learning about cultures, what they represent and mean to people, people’s identities and habits.

As an artist, it is important to be open, as you never know what could speak directly to you, challenge you, and inspire you, but also, it is important for me to show the identity of the person who I am photographing through.

It is also important to note that because my experience as a Sierra Leonean and resident of Côte d’ivoire was fragmented, (by living abroad for extended amounts of time)I try to be as careful as I can to not to make my own views as the standard depiction for West Africa. In my work. I want it to be clear that it is my own portion of the big story that I am telling. My own unique perception, along with other creatives’ work from the continent and diaspora, will forge an authentic story.

Your most recent work, The Queens of Babi(2020), portrays Abidjan’s drag community. Can you explain the significance of shedding lights on queer communities like this in Africa? What are your motivations and goals in doing so?

Of the 76 countries that still criminalise same-sex relationships and behaviour, 38 are African. Recent surveys also show that the overwhelming majority of people who live in Africa strongly disapprove of homosexuality.

The reporting of LGBTQ communities in Franco-African societies is not readily and commonly published. One of the particularities in West Africa is that LGBTQ mobilizing at the community level is relatively new. In Abidjan, there are no real LGBTQ organisations and the members I photographed told me they were often unable to go into certain neighbourhoods for fear of being assaulted or losing their life. Through my photography, I want to change Africans’ perception of the community by sharing their stories, as they reflect true human rights issues. I self-funded the first photoshoot, as this is a cause that is important to me, but I plan to photograph more members of this community, in different environments, including their daily life and more intimate shots of their daily life. I knew that their story had to be shared, but due to the fact I funded it all personally, only one shoot was able to be done. For this shoot, we had a team of eight including the girls and their two makeup artists. With costumes, which are expensive to make, make-up artists, transport, security and a shoot assistant, we went over the budget. I want to be able to share their story well and support them in their endeavours to better their life, including things such as setting up an LGBTQ association for them.

Your work highlights Black bodies. How do you understand the importance of inserting blackness into a white dominating western art canon?

I think representation is extremely important, and often artists should have work that reflects the times. Which is why it is ludicrous that the western art world can not be completely inclusive of work of all gender, races, sexual identities, etc.

It will only keep enriching the content in the art world, normalise things that should be seen as normal and not “the other” and start to end things like the exoticism and dehumanisation of the black body, as it has been continually portrayed in the past, and continues to be, to this day.

In the wake of Gorge Floyd’s death, America faces a new wave of civil rights movement. All industries are having necessary reevaluations and reflections in racial injustice. As an artist of color, what is your take on this movement? How does it affect you artistically?

This is a question that needs so much to answer properly, as systemic racism and racial injustice are things that have affected black people, me included, our whole lives, at times daily. My take on this movement is that it is long overdue, but it must not lose its steam.

I welcome the important conversations that are going on all over the world right now. I also think there is massive pressure and expectations on artists of colour to create work according to this topic, and to be the spokespersons for the movement, when we are not the originators of systemic racism. It’s a pressure that is not always expected of white artists, or people, and these discussions need to be broached by everyone.

Artistically, it affects me and can play on one’s mental health. But in terms of inspiration, I am so inspired by the strength and support all over the world, and the current sense of connection that is being experienced right now, despite the sadness and injustice of the situation.